You are here: Twin Peaks Group > * View all Blog Posts > How to make the perioperative system more productive

How to make the perioperative system more productive

Many years ago, when I was first given responsibility for a major project spanning multiple organizations, I quickly realized that I knew little about project management.  Easy, I thought, I’ll just arrange a two-day course for our department and we’ll be all set.  As the end of our training session approached, I sadly realized that the course offered no help on the biggest problem I faced: The people, assigned to my project by other departments, just weren’t devoting the time to my project that had been promised by their managers.  Not surprisingly, my project started missing its milestones, I grew progressively more frustrated, a lot of finger-pointing ensued, and progress slowed.  My projects succeeded if they were sufficiently small so that I controlled all the resources, but problems inevitably surfaced in projects staffed by people from more than one organization. 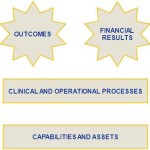 while working at Integral, a consulting firm, I learned that many of our clients experienced the same problem: late projects and frustrated staff.  In fact, as I learned, it was the result of project overload.  Project gluttony we called it.  We found many firms that had taken on more than twice as many projects than they could properly handle and these projects were inevitably late.

Fortunately, we had been brought in to solve the problem by applying a solution devised by Integral’s founders, two well-known professors at the Harvard Business School.  The remedy boiled down to“less is more.”  By reducing the number of projects to a manageable level, our clients’ output began to rise.  What’s more, it was the “right” kind of output because they were now prioritizing their projects according to their strategy.

How did we accomplish this transformation?  We first worked with our clients’ executives to help them express their strategy in some readily understandable form.  Although this was not easy, it was the next step that was really painful – getting managers to agree on the projects to be dropped.  However, I was always amazed that, once the managers got the hang of it, the process moved rapidly.  Then, to stay on the diet, the clients’ management teams tracked projects and assignments to avoid overload.  Projects could not be initiated until resources were available.

Hospitals – and perioperative systems in particular – also suffer from project gluttony.  And it turns out that applying this solution is more challenging there than in engineering, packaged consumer goods and banking organizations where the solution was initially applied.  Why?  There is less experience with project management, and most clinicians have day jobs.  They are thus forced to work on improvement projects when they can fit them in.  By contrast, most other industries have the flexibility to make improvement projects a temporary “day job.”  Paradoxically, another barrier in hospitals is the current pressure to perform many Lean projects.  I don’t dispute the need for clinicians to learn how to do Lean; I believe, however, that improvement projects, regardless of methodology, should be undertaken only if they fit into the hospital’s portfolio.

Despite these challenges, I am confident, that the method can be readily adapted to hospitals.  In fact, along with Kathy Brooks, Vice President of Jackson Surgical Assistants, I have written an article on how to apply it in the perioperative system.  The article, entitled “Performance Improvement in the Perioperative System,” appeared in the December issue of Healthcare Financial Management. In it, we introduce a strategy map for the perioperative system and use it as the starting point for portfolio building.  We then show how to build a portfolio, illustrating it with a variety of projects.  We include both clinical projects such as reducing complications and operational projects such as reducing costs.  In each case, we provide suggestions on how to staff the project and how long it should take.  Finally, we describe a simple spreadsheet tool that can be used to avoid project overload.

This entry was posted in * View all Blog Posts, Perioperative Systems-related, Quality and safety. Bookmark the permalink.