The September 2011 issue of Consumer Reports carries report cards on the quality of CABG procedures performed by 324 groups/hospitals. 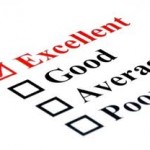 Ratings of one, two or three stars,  corresponding to performance below, at and above average, are based on performance in 11 categories (e.g. risk-adjusted mortality after CABG, antiplatelet medication at discharge and percentage of procedures performed using an internal thoracic artery).  A 2010 article in the New England Journal of Medicine (NEJM) describes the program (http://www.nejm.org/doi/full/10.1056/NEJMp1009423).

The rating system was developed by the Society of Thoracic Surgeons (STS) whose web site includes more details on individual ratings (http://www.sts.org/quality-research-patient-safety/sts-public-reporting-online).  The methodology, endorsed by the National Quality Forum, is based on a registry of about 90% of approximately 1100 U.S. cardiac surgery programs.

When Consumer Reports published the first set of ratings in October 2010, the NEJM article, cited above, called the public disclosure “a watershed event in health care accountability.”

I believe that this year’s report, based on data running from July 1, 2009 to July 30, 2010, is particularly significant because the number of groups/hospitals that have chosen to go public has increased by more than 100, and because five groups/hospitals with below-average performance had the courage to disclose their report cards.

My disappointment lies in the absence of reports from many famous institutions – Massachusetts excepted – and the lack of analogous report cards for other specialties, such as orthopedics and vascular surgery.  I had hoped that their respective societies would have followed the lead of the STS.

As a consultancy devoted to helping our clients create high-performing perioperative systems, Twin Peaks Group applauds the initiative of the STS and the two-year trend in public disclosure.  We believe that hospitals should measure and publish risk-adjusted outcomes.

With that in mind, how gratifying would it be if next year’s announcement in Consumer Reports listed report cards for 500 groups/hospitals, and revealed that this year’s one-star performers had added one or more stars?

This entry was posted in * View all Blog Posts, Perioperative Systems-related, Quality and safety. Bookmark the permalink.